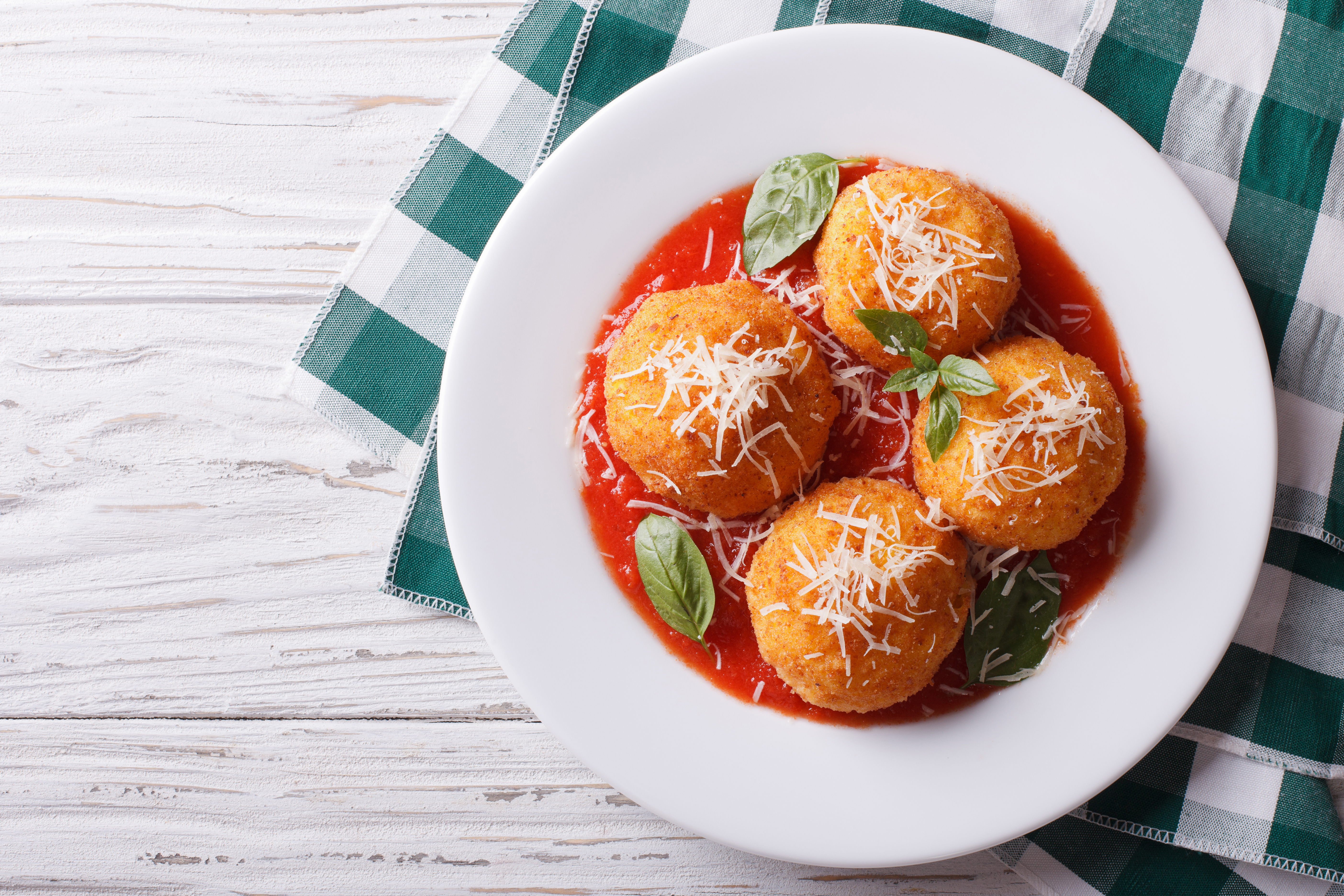 Italian cuisine is more than just pizza and pasta. The rice ball is one of the most underrated Italian dishes. Italian rice balls or arancini in Italian are round balls of rice coated in a golden crust of breadcrumbs. The name is because they resemble oranges when they’re fully cooked. Traditional arancini are filled with mozzarella, peas, and ragu (Italian meat sauce). However, over the years many different variations have evolved to include spinach, mushrooms, raisins and more.

History of the Italian Rice Ball

The basics of rice balls are said to date back to the 10th century. During this time Sicily was Arab rule. Dinners included plates of saffron-infused rice with meat and vegetables. During the 12th century, people formed balls, coated and fried them. They were originally designed to be brought on long trips. This is because they were easily transferable and filling.

The first arancini were sweet rather than savory. They contained ingredients like ricotta, cheese, sugar, spices, and milk. Tomatoes arriving from the “New World” changed that. Italian rice balls began to include ragu and become more savory than sweet.

When to Enjoy Arancini

People traditionally eat arancini on December 13th or Santa Lucia’s Day. Sicily experienced great famine in the 17th century. The tale takes place on December 13th, 1646 when a grain supply ship miraculously arrived in the harbor of Sicily. Coincidentally this happens to be Saint Lucia’s day. People believed the ship was Saint Lucia relieving the island from famine.

Therefore, it’s traditional to abstain from eating bread and pasta on Saint Lucia’s Day. Instead, Sicilians enjoy a diet of dishes made from grains like cuccìa (wheat kernel pudding) and of course arancini.

What’s at the Center of the Rice Ball?

Traditionally, you make Sicilian arancini with a risotto mixture formed into a ball. You fill the balls rice with cooked meat sauce, peas and a cube of mozzarella. You coat the balls and then submerge them in oil to fry. They cook just long enough for the mozzarella to melt and the breadcrumbs to crisp.

Rice is the most important part of the rice ball. Sansone Market offers a huge selection of rice including Arborio and Carnaroli rice. These are the best options to use when you prepare rice balls. They stick together better than regular rice. You mix the rice with parmesan cheese, olive oil, and chicken stock and form patties. Then you add the ragu to the center of the rice patty. People commonly use a Bolognese, or meat, sauce. Although not required, sometimes most people include peas in their sauce.

It’s common for people to add a fresh cube of mozzarella to the center of these scrumptious spheres. When you cut into the crisp bread crust a seductive stretch of mozzarella cheese will emerge. Sansone Market offers a wide selection of mozzarella. They also have a recipe on how to make your own homemade mozzarella.

Flour, egg, and breadcrumb are the last core ingredients. You coat your risotto ball with these three ingredients after filling it with ragu and mozzarella. First, you roll it in flour, then cover it in egg and finally coat it in breadcrumbs. This process ensures your end result is a crisp golden-brown outer layer.

Rice balls in Italy are usually the traditional Sicilian arancini. However, arancini leave room for culinary creativity. It’s easy to make substitutions and add your favorite vegetables or cheeses. Are you a vegetarian? Simply substitute the ragu for Sansone Market’s marinara or vodka sauce.

There are many varieties of rice balls throughout Italy. For example, a popular variation is a mozzarella and spinach arancini. The recipe is easier because you mix the spinach right into the rice. Then you add a cube of mozzarella for that succulent cheese pull. After you coat and fry them they are ready to eat.

Mozzarella arancini is another popular recipe of a simple risotto mixture in a ball with a cube of mozzarella in the center. This is a great recipe to make when you have leftover risotto from another meal. After you coat them you can serve them with Sansone Market’s marinara sauce for dipping. This makes a great appetizer for any occasion that your guests will love.

Italian cuisine changes to adapt throughout its regions. With rice being such a prominent product in Sicily, the arancini was born. Sansone Market offers all the ingredients necessary to create your own arancini at home. Make the preparation a family affair. Rice balls are a perfect recipe that allows your family to get creative with family dinner time.